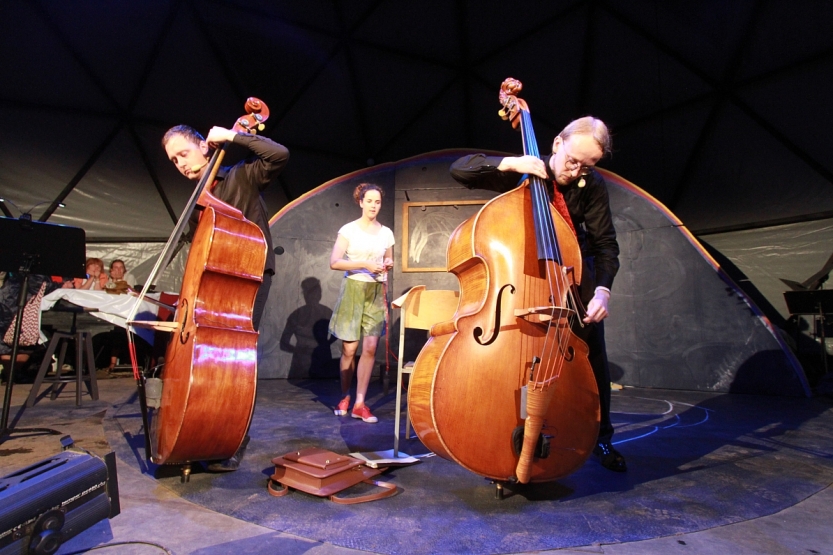 As people grow up, it seems that the world around them is shrinking. However, there are things that look the same as in childhood. Maybe because they are very far and never reachable – like the sun and stars. Alternatively, because we always look at them with a child’s eyes – like cherries, lovely hands and smiles.

In Aivars Neibarts’ poem “Loveness”, which is the main inspiration to the creation of the performance, the small things are the ones that reveal the most important and beautiful details of human life and invites to see the world as characters in order to understand it better.

The performance brings together contemporary dance, drawing and music. On stage, the choreographer, dancer Agate Bankava and musicians with the largest string instruments of the symphonic orchestra – contrabass – meet in imaginative stage design, and during the performance in front of the viewer’s eyes upcoming drawings.

“Precisely because of Kristaps Peterson’s mystical and temporally specific sound language, which so characteristic to him, is the greatest value of this performance”
-delfi.lv, author Andris Dzenītis, 23.08.2017.

The first copruduction with Hiroko Oshima, a scenographer form Japan, was a chamber ballet “PoetryButterfly” and the inspiration source of the performance was  Aivars Neibarts’s collection of poems “Taureņkaraļvalstība” (Butterflykingdom). Beck then the Drawing theatre has been recognized with the Latvian theatre award in 2012 as the best show for children and youth as well as received many other awards internationally.

The performance is fascinating for children and inspiring for grownups.